On June 19th, 2016, Blue Origin's New Shepard rocket, propelled by its liquid hydrogen and liquid oxygen fuel, to an altitude of 331,504 feet above the West Texas landscape. Both the launch vehicle and jettisoned crew capsule returned to Earth for another successful flight and landing.

On November 23, two proprietary JLAIR long range optical tracking systems owned and operated by FlightLine Films successfully recorded the first time a rocket booster flew to space and returned for a vertical landing back on Earth. Blue Origin launched its New Shepard space vehicle to an altitude of 329,839 feet and FlightLine Films was hired to capture the entire ascent, separation and then landing of both the crew capsule and booster.

CEO of FlightLine Films, Jay Nemeth reports, "With one JLAIR being assigned to the booster and the other tracking the crew capsule, flight controllers had eyes on both vehicles at speeds up to Mach 3.72. Despite some cloud cover, we maintained imaging of the entire flight with our Short Wave Infrared Camera.”

Once the booster and capsule descended through the clouds, FlightLine Films resumed imaging with all sensors including two RED Dragons with 8000mm optics. 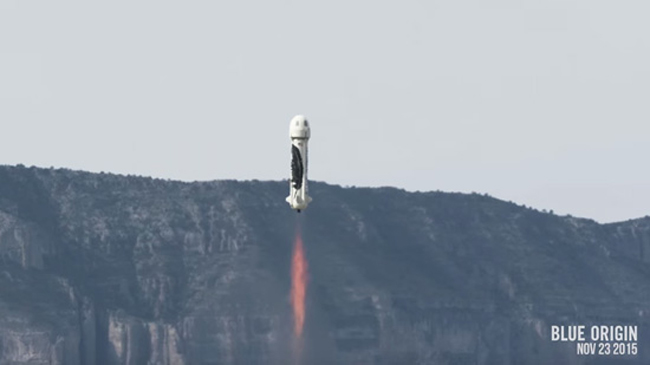 Big thanks to the entire FlightLine Films team for once again raising the bar in aviation imaging!

Join FlightLine Films and the JLAIR team, at Cal State L.A. in mid October. FlightLine Films will be offering students the opportunity to experience hands-on operation of the JLAIR - FlightLine's mobile long range tracker. Students will be able to see real-world applications of skills that are not only used in the space industry, but have created off-shoot industries by pioneers with a vision.

In addition, there will be multiple presentations by a variety of speakers in different areas of physics, aerospace, biology, engineering, math and arts. 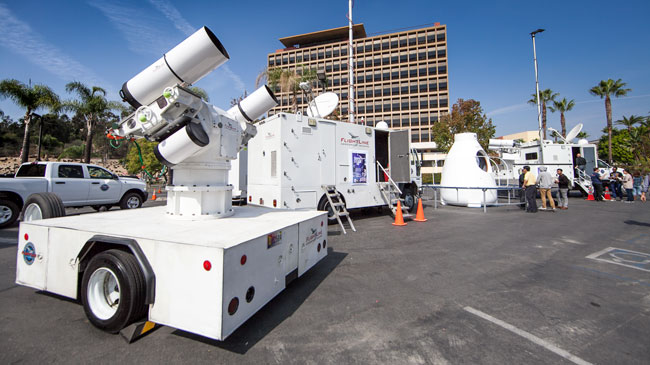 FlightLine Films and Red Bull Gear Up For The 2014 Championship in Las Vegas, NV and Dallas, TX

FlightLine Films was on hand for SPIE (The International Society for Optics and Photonics) at the San Diego Convention Center.

Conferees were welcomed by the FlightLine Films' team with tours of the mobile broadcast studio and long-range optical tracking vehicle (JLAIR 1). Guests were also afforded a unique opportunity to view hands-on the actual space-flown cameras and electronic payload system that were used for the Red Bull Stratos mission.

For the plenary session, former SPIE President and SPIE Fellow, Joseph B. Houston gave introduction to "Optical Mission Behind the Stratos Project", presented by Dennis Fisher and Jay Nemeth of FlightLine Films.

FlightLine Films sets up shop at the 2013 Space Tech Expo conference. Aerospace cinematographer and guest speaker Jay Nemeth, founder of FlightLine Films, addresses the conferees with an overview of the company's latest achievement with the Red Bull Stratos Mission. 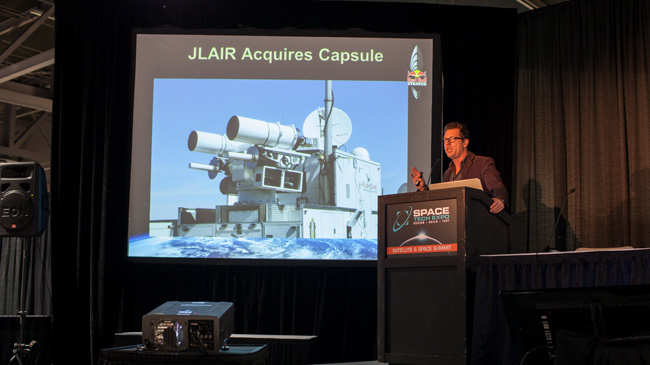 Flightline Films, Red Bull Media House and YouTube were recently honored with an Emmy Award for "Outstanding New Approach in Sports Event Coverage" by the Academy of Television Arts and Sciences for our production of the Red Bull Stratos Space Jump. We would like to thank all of the talented members of our team who raised the bar for imaging aerospace missions. We are honored to be recognized by the Academy for the hard work we put into the mission:

"When Felix Baumgartner made his 23-mile high jump from the stratosphere on October 14th, 2012, documenting this epic feat required a "floating movie studio" working in near space with cameras remotely operated from Earth. The Red Bull Stratos mission called in zero-gravity specialist Jay Nemeth of Las Vegas-based FlightLine Films to oversee the high-altitude photography. Howard Kayofski, a colleague of the GTC, takes a look at the camera technology behind this remarkable broadcast." 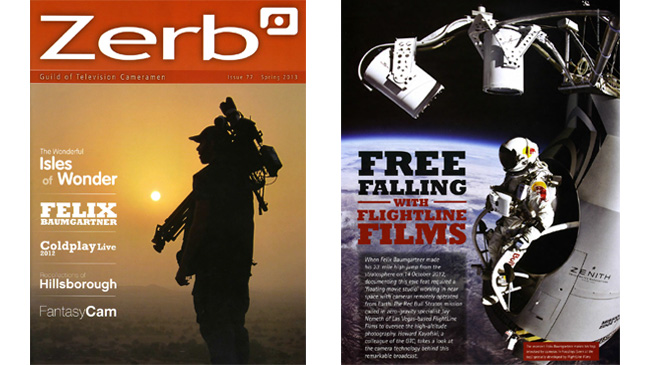 Red Bull Stratos - a mission to the edge of space. Pilot Felix Baumgartner ascends to the stratosphere in an attempt to launch a freefall jump that will see him become the first person to break the speed of sound with the human body. The data captured by this mission and its team of world-leading scientists promises new standards in aerospace safety and expanding the boundaries of human flight.

A brief look into the custom space qualified camera systems used for the Red Bull Stratos mission. Colonel Joe Kittinger, Jay Nemeth of FlightLine Films and Art Thompson of Sage Cheshire Aerospace discuss the complicated designs and implementation of the current array of state-of-the-art, high resolution space rated camera systems and how they will be utilized to capture the this historic event in cinematic story telling fashion.